to attend our PRC CPD Accredited Seminar on 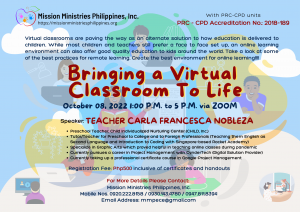 Her main reason for enrolling was to earn a certificate as a requirement in her job.

She would never have imagined that this was God calling her, though. According to her testimony, she was not raised reading the Bible and did not even know how to open it, let alone know the texts inside.

She was astounded by the way their professor, Pastor Jhun Osorio, described the bible when she attended the first module, which is the Bible Introduction. She was also amazed by how simple it was for her classmates to locate the scriptures under discussion.

According to her, she joined this training certificate program purely for the goal of earning the certificate and had no idea that she would learn anything much more significant about God. It is like hitting two birds with one stone.

She has a friend in college who kept on inviting her to join a Christian community. But she refused. And yet God has a way.

She is compelled to listen in order to complete the Training Certificate in her Early Childhood Education class. However, she was able to learn more about God and develop her faith when she opened her eyes, ears, and heart.

This training certificate teaches more than just the fundamentals of early childhood education; it also emphasizes the importance of the Bible. After all, God is the foundation of everything.

There is no upcoming event 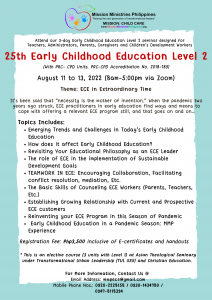 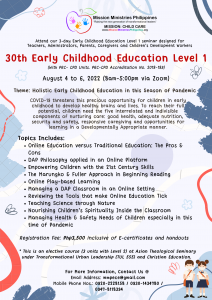 MMP’s Training Certificate Course in Early Childhood Care and Education was one of the services that were affected by the pandemic two years ago. There were no registrants for this program, perhaps due to uncertainties in time and resource constraints.

After two years of promotion, the program is finally available for this class online via Zoom. The first module, Bible Intro, began on April 23 and May 7, 2022, with lessons beginning on those dates. There were 12 students from different places in the Philippines, as well as Jakarta, Indonesia. The Holistic and Transformational Ministry is now the third module of the ECE Training Certificate. The number of students enrolled has grown.

We had problems, just as we would in any other online class. However, there are advantages as well, such as bringing students from many locations together to learn Childhood Education from a biblical perspective. This is one of the distinctive elements of Mission Ministries Philippines and Asian Theological Seminary’s Training Certificate.

According to the students, learning more about God and the significance of developing a stronger relationship with Him before fulfilling their duty as teachers have been humbling. “In a world of shifting views, Christian Education is steady,” noted one of the professors in the ECE modules. We are not only teachers for our pupils’ futures, but we are also teachers for their eternity.

Enrollment in the Mission Ministries ECE Training Certificate is still open. You can reach us on Facebook at MMP ece or by email at ecemodule.mmp@gmail.com, or by calling Ms. Erlyn Isidro at 09301434780. 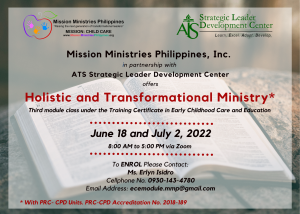 One of the many difficulties parents and teachers are encountering nowadays is disciplining the children.  The new normal of teaching made it more challenging for teachers to correct the behaviors of their students. To address this issue, Mission Ministries Philippines had its 3rd refresher course entitled “Child Discipline in an Online and Face to Face Platform” last October 9, 2021, facilitated by Prof. Claribel “Bing” Amihan.

Teacher Bing explained the importance of developing self-discipline in the child by explaining the rules and the benefits of following the rules. The child will be motivated to do what is right no matter how difficult and challenging it is.

The topic was divided into 4 subtopics: a) Definition of terms, b) Characteristics of Children c) Goals of Discipline d) Discipline guidelines e) Take care of the self. Teacher Bing had not only discussed the main topic about discipline but broadened it by explaining on understanding the child and the environment he or she may be in. Adding to the child’s development and how gadgets and the internet have been affecting the child.

The webinar was attended by 100 participants. And due to public request, another date was set last November 27, 2021, to cater to other participants who were not able to attend the first webinar. This was the first time MMP’s webinars had a repeat. 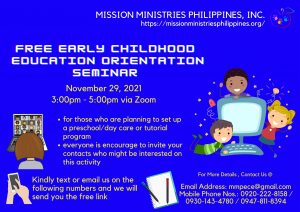 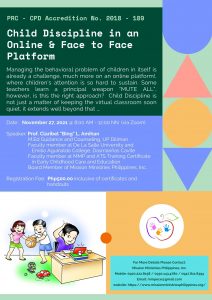 MMP Celebrating the Birth of Christ

ECE Batch 2022 Get Together

YOUR GIFT TO MISSION: CHILD CARE equips Mission Ministries Philippines with the resources and supporting services to fulfil our mission of educating children and families out of poverty, family and community development, and sharing the Gospel.

MMP Celebrating the Birth of Christ